BREXIT obviously isn’t going to happen very quickly, so the Last Laugh Looney Party is gearing up for the European Parliamentary Elections by preparing its Manifesto.     The LLLP must admit they are scraping the barrel trying to find candidates to stand in the European Elections.    Fortunately, they have found somebody who is almost exactly like Nigel Farage, except he drinks cider rather than beer.   This is the next contribution from a GrumbleSmiles character – Ciderman. 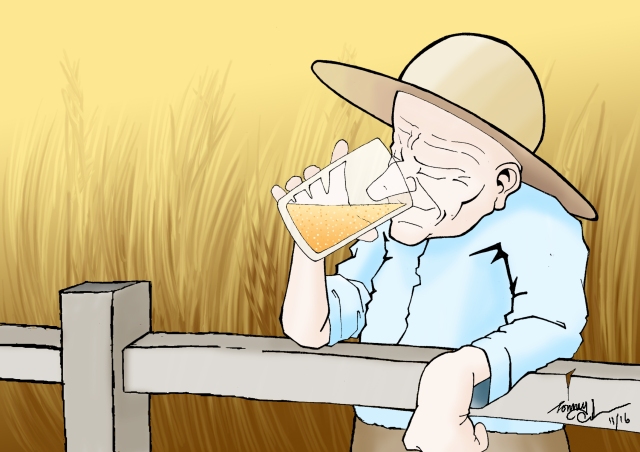 Ciderman has quite a lot to say – hicc – about European MPs.

First of all he thinks the German Euro MPs should stop drinking so much lager, because it makes them – hicc – too aggressive.  And we all know that we don’t want another war because then the Brits would have to come and sort it out again.

Secondly, Ciderman thinks – hicc – that the French and the Italians and even the Spanish should all drink a lot less wine because it makes them sleepy in the afternoons and they don’t get much work done.

Ciderman solution – hicc – is that Euro MPs should drink a lot more British cider.  That way they would have a lot more fun.   Hicc – and he also recommends that they should do a lot more leaning on fences instead of jumping in with both feet and dreaming up more and more regulations – hicc.

“Cheers, here’s to a BREXIT exit”