The £155 pension hardly anyone gets !

I have been writing about pensions almost from the start of my blog and a familiar theme in many of my posts is about the cynicism and duplicity of ‘ political speak’.   So many political announcements grab headlines on day one and then dissolve in a mist of limiting qualifications and ‘misspoken’ corrections almost immediatly after.

There is no better demonstration of this than the loudly heralded story of the big rise in state pensions first announced in 2011.    Five years later on 6th April this week it finally comes in to effect.    So you might expect to see pensioners dancing in the streets or celebrating in  the pub 😄.    Perhaps a few are at the local car dealership trading in their old banger for a Lamborghini ?    Or maybe they have all gone away on luxury Saga cruises to the Caribbean ?     All thanks to their new-found wealth and politicians seeking their votes in advance of the last two general elections.

Sadly, it will not be possible to thank the Government Ministers  responsible.   Steve Webb, the liberal democrat Pensions Minister, was kicked out of parliament at the last election and has managed to secure  a lucrative job in the pensions industry.    Ian Duncan Smith, the Secretary of State, resigned from the cabinet last month, just before his legislation came into being.     Such a shame that they are not around to see their bounteous generosity transform the lives of older people 😞 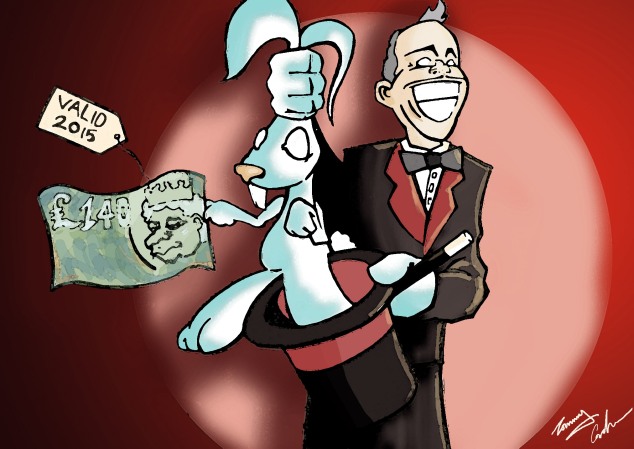 Ah, but wait a minute !    It now appears that 8 out of 10 people who retire in the year ahead will not qualify for the full state pension.    Just as I predicted 5 years ago, when it was first announced.

Remember too, that none of this largess is granted to people who retired before April this year.    They still remain on the much lower original state pension of £119.30 per week.    Evidently they can get by on £2000 a year less than the new pensioners !     Presumably because of their experience of rationing and hardship during the Second World War they know how to live frugally.     No age discrimination there then and no compassionate Conservatism either.

In spite of the ‘life changing’ increase for the few, the UK still has one of the lowest state pensions in the developed world.    1.2 million  or 16% of pensioners, have no other income than their state pension and about 1 million live below the official poverty line.

This entry was posted in Pensions and tagged "The £140 pension illusion". Bookmark the permalink.

2 Responses to The £155 pension hardly anyone gets !