An excellent article by Kate Wighton in The Daily Mail on 31st January 2012, highlighted the incidence of pressure sores in the NHS.

Without any sense of irony, it was included in the section of the paper under the banner “GOOD HEALTH“.  Nonetheless it is a first class piece of investigative journalism and deserved to receive much more attention.

Most of the factual information was dragged out of NHS hospitals using the Freedom of Information Act.  Even then some hospitals didn’t reply at all, and others claimed they did not collect the information or only had detail of the worst sores.  This is a dreadful indictment of hospital managers, their Boards and their Regulators.  In some cases it must be a deliberate attempt to hide poor performance and willful neglect.

That is why it is a pity that a paper that makes so much noise about championing its “Dignity of the Elderly” campaign, placed this article on its Inside Health pages instead of the front page.

First of all let me repeat some of the key figures in the report:-

The elderly are particularly at risk because of poor circulation and limited mobility.  Bedsores can develop in as little as 4 hours, but then take weeks or months of nursing care to heal.

The Daily Mail published detailed figures from individual hospital trusts which suggests that upto 2% of patients acquire bedsores.  I must say I am surprised these figures are as low as that, given the constant stream of stories of malnutrition, dehydration and poor care that emanate from the NHS.

My own experience in the past of running nursing homes in the ExtraCare Charitable Trust, was that bedsores were given the highest attention by the nursing staff.  The figures were very low but even so were reported every month to the whole director team.  Our Operations Director, who was a former and formidable hospital matron, would personally take to task any nursing home manager whose residents acquired a pressure sore while in our care.  Almost all of our residents who suffered from pressure sores were discharged from hospital with them.  This was at a time when we looked after around 1,000 nursing home residents.

The Department of Health has belatedly announced that pressure sores will be included in a list of patient outcome measures – which is good news – but then with typically crass ineptitude goes on to suggest that hospitals will lose some of their budget if they fail to meet pressure ulcer targets.  This upside-down big stick management style will only lead to the figures being further under reported.  The hospitals with the biggest problems need help, not less money.

The common sense solution, which has been much talked about, but not effectively implemented, is to get empowered matrons out of their offices, away from paperwork and acting as nurse leaders on the wards.

A GrumbleSmiles tongue in cheek alternative would be to give free desk space on every hospital ward to no win no fee solicitors who specialise in medical negligence.

If the Department of Health just passed over a large part of the NHS budget to solicitors, I know they would be more than happy to regularly visit hospital wards and interview patients.  Perhaps they could join the doctors’ rounds and collect the data as they go along.  Then to speed up the compensation claims, patients could be given a payment for all the hospital acquired infections and pressure sores, as they are discharged. 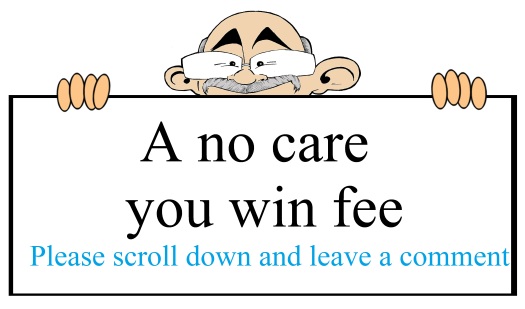 This entry was posted in Uncategorized and tagged NHS. Bookmark the permalink.