This is a series of graphs which show the results of our third CAFE group meeting held in the Welcome Centre, adjacent to Coventry University Technology Park, on Friday 21stJune 2013.   The focus of this survey was WEALTH and HORIZONS as perceived by the  “expert” group of older people.   It is representative only of their views of themselves and doesn’t purport to be typical of other groups of older people in Coventry.

The commentary on the graphs is entirely my own personal reflections.    ( Other posts in this series can be found either by clicking on “CAFE Project” in the Tag Cloud or by clicking on  “GrumbleSmiles Trust” in the Topics list) 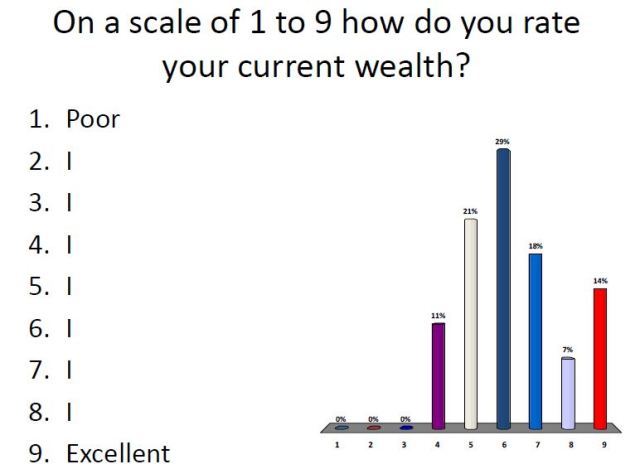 The first thing to note when looking at this graph is that the definition of wealth is subjective and not measured simply in financial assets.  In the survey group nobody rated themselves at the lower end of the scale of wealth.  Around 60% assessed themselves as adequately well-off with the remaining 40% even more positive.  That’s a contrast with the commonly held view of impoverished old age which may be a reflection of the group we surveyed.  At the same time the elderly as a whole in the UK hold most of the disposable income in the population.

This entry was posted in GRUMBLESMILES TRUST and tagged "A Wealth Ladder", CAFE PROJECT. Bookmark the permalink.