I used to do Tai Chi early in the morning in the garden most days of the week……..a while ago………..a good while ago !       Recently I have noticed my joints are much stiffer and my breathing is much wheezier.  I wonder if these things are related?

A study of Tai Chi exercises for older people was reported in the Journal of the American Geriatric Society and would seem to suggest so.    The good news is that those who did the Tai Chi were 50% less likely to sustain an injury- causing fall compared to the other group.

These results were reinforced by another analysis in the British Journal of Sports Medicine.      Reviewing studies of the benefits of Tai Chi it found improved outcomes when used as treatment for arthritis, breathing, concentration, muscle strength and balance.    As well as increasing peoples’ sense of well-being.

I had better get back to Tai Chi in the garden again.  Maybe just a little later in the morning!

PS   My memory seems to have lapsed as well, because when I looked back over my blog I found some earlier posts on the subject of Tai Chi.    In July 2011  I commented on research in  America extolling the virtues of Tai Chi for older people.   Tai Chi is certainly proving to be a useful subject for researchers, even if it needs repeating every few years!

PPS    The cartoon I used then, which I include below, is of me as the super-hero helping the older ladies in Kilsby Village Hall keep fit with some Tai Chi moves.     In truth, they are doing it and I am not! 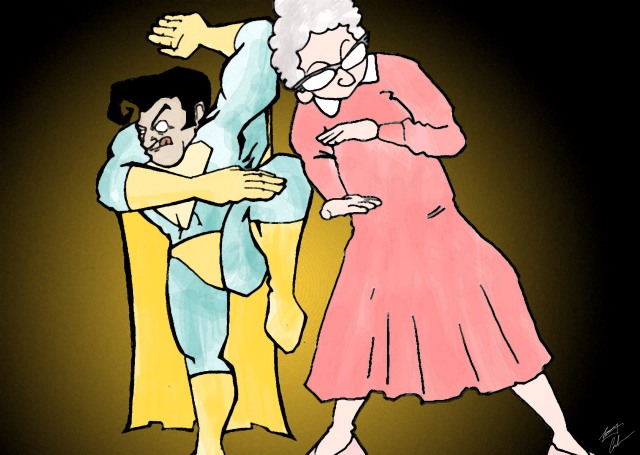 PPPS.     When l look back even further, to September 2010, I find my first post about Tai Chi.     Perhaps I am better at writing about it than doing it 😄

This entry was posted in SMILES and tagged Exercise, tai chi. Bookmark the permalink.