After an article about exercise equipment in Hyde Park for the older generation, there was a tongue-in-cheek follow-up in the Times’ letters by Susan Whitfield of London, 22 May 2010, which suggests connecting the exercise machines to the National Grid and using them to make energy.  She goes on to propose having machines in every park and pedestrian precinct.

Maybe since they have so much spare time, all retired people should have to do an hour a day of “energy generation exercise” to earn their entitlement to a State Pension.

The wealthy and the frail could pay more energetic pensioners to do their exercise for them – an “E.G.E. off set”.

Power companies could compete for elderly power workers by designing and building the most interesting exercise machines. 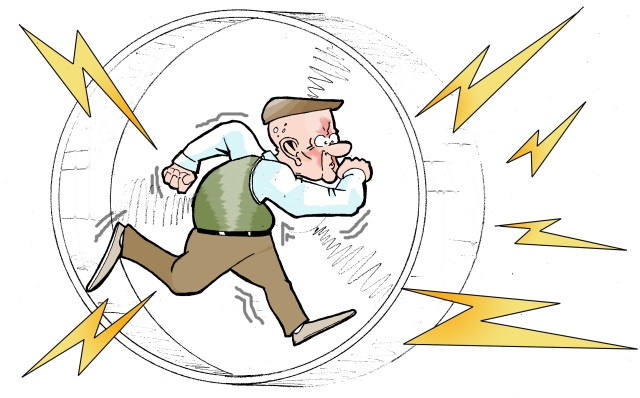 The Millenium Wheel could be converted into a vast treadmill and relocated in Hyde Park.  Then hundreds of old people could go on a stroll in the park and produce energy at the same time.

Roman slave ship scale rowing machines could be moored all along the Thames for all London pensioners to do their daily exercise and generation.

How many more ideas are there for older people to exercise and create energy?

It certainly brings a whole new meaning to the older generation and to “grey power”.

This entry was posted in ELDERLY MARKET and tagged smiles. Bookmark the permalink.