This is one of a series of blogs which describe my trip to Japan in April 2012.  To see earlier blogs in the series, click on “Japan Odyssey” in the Tag Cloud.

Takashimaya is an upmarket department store in Kyoto.   We went there to see a Marc Chagall exhibition.   Not exactly the normal way to use valuable retail floor space !    Since we were directed to the “exhibition hall” it is evidently in frequent use for this cultural purpose.   The gallery was well attended and not full of shopping bag carrying temporarily diverted customers. 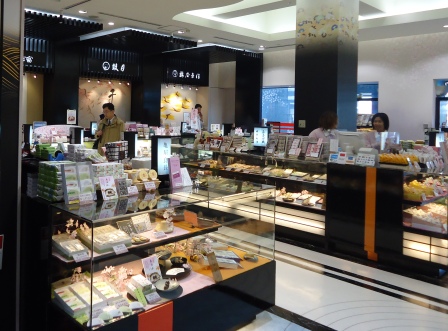 As lunchtime was approaching, we went to the food department with counter after counter of unrecognisable delicacies.   As you pass by each section, the assistants shout a high-pitched “welcome” at you, like fruit and veg market stall holders in the UK.   Walking by the fresh delicatessen counter which had about ten assistants, set them all off in unison.  Clucking like a coup of squawking chickens.

We finally found the Sushi bar and expected to go in and be able to select one or two samples of food for a light lunch.   First problem was the door again – we could not see in, so when we entered we were surprised to find ourselves in a tiny room with a counter only big enough for a dozen seats —  with a white aproned chef and only one waitress.   Next problem – the menu was all in Japanese – no pictures and no English speakers.    So we pointed at the mid priced set meal and hoped for the best.    We were not disappointed – individual bowl after bowl of food was placed before us.

It was all interesting, although we had no idea what most of it was.    After about an hour and ten courses, we were presented with a plate with one real chilled strawberry and a quarter of grapefruit which turned out to be delicious jelly.    This looked like the last course, but we were only certain when the people at the end of the counter got up and left.

Another surprise experience behind a closed-door.

Next some gift shopping.    I went to browse in the homeware department.    I obviously looked lost after ten minutes of aimless wandering and an assistant approached and offered to help.     When it was apparent I could not speak Japanese, she apologised and fetched someone who spoke fluent English and proceeded to be my personal shopper.  Each time I selected something, she picked up the plastic label off the display and someone else came and took it them away.    When I had finished my selection, she ushered me to sit down at a table.   All my selections were already waiting neatly laid out in front of me.    I was asked to check these were the correct items and then to choose a wrapping paper and colour of ribbon.    I was just wondering how I would keep track of what was in each box, when I was asked to put the name of the intended recipient on a strip of paper.  Then all the presents were taken away.    Within five minutes they were all returned wrapped, ribboned and protected with bubble wrap with the small paper name-tag labels attached.

A brilliant lesson in customer service !

As I left, I passed another exhibition in the store.   This time a big room sparsely filled with displays of ikebana flower arrangements.   The attendants were all ladies in Kimonos.

THANKFULLY IT WON’T BE

This entry was posted in SMILES and tagged "Japan Odyssey". Bookmark the permalink.