Way back on Step 22 of John’s de-cluttering journey he thought he had de-cluttered the clutter of  cleaning materials.    How wrong can you be?

The clutter Bears have now taken over and are going to be much more thorough than John, who misses things all the time.  The bears have moved on to emptying the many boxes around the house and have discovered a whole hidden world of even more bottles and aerosols of every Cleaning complexion.    There is obviously a lot more to Cleaning these days than bears realised.

It is a pity that the manufacturers of cleaning materials don’t co-ordinate with bathroom box makers, then perhaps the bottles and boxes would fit inside the boxes😀   This is what the bears found just by searching around properly and reading the labels :-

All this research  and hunting down cleaning things was boring, so  the bears decided to have a Wild West shoot out, —- which was much more fun than John was having.    We think John is not having half as much fun cleaning his third toilet. 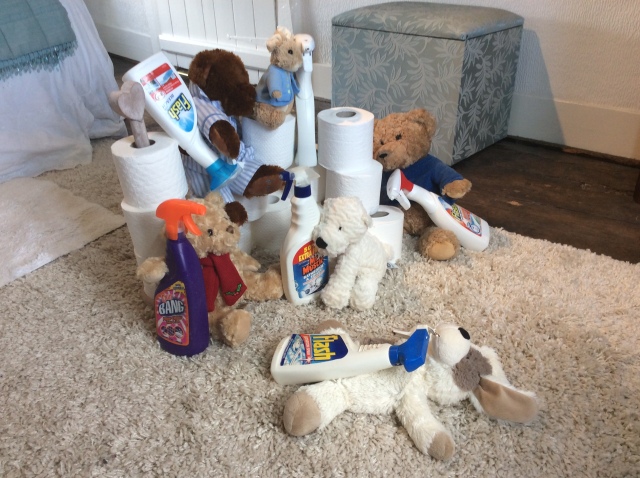 If Bears weren’t so cynical, they would probably think that there is just one type of cleaning product and the manufacturers just pour it into different bottles.

There will be a copy of Walt Hopkins and George Simons’ book — “Seven Ways to Lighten Your Life Before You Kick the Bucket” — for the best ideas on de-cluttering.

This entry was posted in SMILES and tagged Bears, Clutter. Bookmark the permalink.