This is my annual performance review of how well I have been doing with shedding the accumulation of ages.

It has been a year and 63 blogs since I started my decluttering, almost to the day.   So what progress have I made?   And how do I feel ?   Have I freed myself of the cobwebs of yesteryear ?    Have I found a brave clutter-free new world ?

I have discovered that nobody much wants my clutter.   Perhaps I shouldn’t be surprised, although most of it was very useful to me when I first had it.    In today’s throw away society holding onto things is hoarding.    Yesterday it was thrifty. 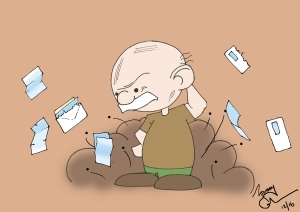 The forest of paper and envelopes that I had in abundance have long since been made obsolete by email. 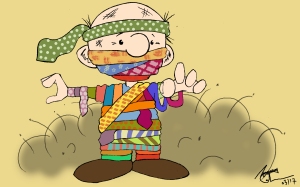 My beloved ties which I only half disposed of have all but been rendered useless by the fashion for open neck shirts.

My garden sheds are a success story, they are all tidier and better organised and I can’t even remember the stuff I have thrown away. I have even been inspired to have some new doors made for them next year.   Of course I will have to have another clear out  before then, because they are already starting to fill up again.   I didn’t throw away enough stuff first time around.   Too many pots, too many garden cushions and too many half-used but now years old weed killers and fertilisers probably past their fertilisation date.

So why do I say only 60/40 success?    Well I don’t feel unburdened.   Apart from my sock drawer that is.    Socks are simpler now even though I still have several colours and lots of black pairs and another drawer of thick walking socks.   I must do a lot more walking!

Perhaps that’s the secret.    One drawer or box or shed for each item.   Only problem is that I will need a lot more drawers, boxes and sheds if I go down that road.

There will be a copy of Walt Hopkins and George Simons’ book — “Seven Ways to Lighten Your Life Before You Kick the Bucket” — for the best ideas on de-cluttering, although they have never mentioned any bear ideas in their book.

This entry was posted in SMILES and tagged Clutter. Bookmark the permalink.